This week’s In Development was about manabases, and included a manabase worksheet for the current Standard. You can go to the article to get that worksheet in Excel format.

I’ve received a lot of requests for a similar worksheet for Modern.

As it happens, I made one of those for the last Modern PTQ season, and wrote about it in The Very Model of a Major Modern Manabase. The worksheet is in Numbers format, and will break if you try to import it into Excel, unless things have changed since I last checked. You can download it from the linked article, which also includes a handy video tutorial on how to use the worksheet.

I’ve written about prior Standard manabases (with associated worksheets) in All Your Victories Begin Here, which had worksheets for Scars – Innistrad Standard. If you want to go back even farther, you can read Building a Deep Mana Base.

I’m thinking of making an updated Modern manabase worksheet using Excel this time. That has dual advantages (as I mentioned in the most recent In Development) – it’s usable by more readers and I don’t have to hand code the hypergeometric distribution.

If any of you have specific questions you’d like to see answered by a worksheet, let me know and I’ll see if I can tackle them.

This week’s In Development looks at the deck choices of top-performing PT players in terms of whether they picked (and how they did) with more or less popular decks. Luis noticed something else that’s baked into the data:

It’s true – all of Luis’s 24+ performances have come at the helm of full-on aggro decks.

That prompted this bit of bonus content looking at the deck types that top performers have piloted to victory. In no particular order, here are our nine players with their deck choices and success levels by category. The visualization is the same as in the article, with green (24+ points), yellow (15-23 points), and red (<15 points) and the intensity of each color reflecting the number of performances in that category.

That red square of badness in combo for Estratti is almost entirely Valakut decks.

Crushing victories seem to be weighted toward Aggro and Combo, which isn’t necessarily surprising. Having a proactive, aggressive plans does mean that if your opponent stumbles, you often just win.

After a work-related hiatus, In Development is back up and running.

In case you missed it, here’s this week’s In Development, in which I discuss cumulative mana curves and the idea of cards being useful at certain points in a game.

The article itself uses the current Standard for examples, so if you read it you’ll see cumulative curves for Delver, Wolf Run, Solar Flare, and others.

My original motivation for examining this issue was Paulo’s love affair with aggro-control, so I found myself asking…what about his other examples? How did CawBlade and Faeries match up?

So here you go. Drawn from two Pro Tours, we have CawBlade, Faeries, and some of their opponents.

This Pro Tour featured several CawBblade lists in the top 8, along with some fast aggro and one example of a control deck. Two things stood out to me here. First, Grixis is all utility cards and trumps, with nothing in between. Second, CawBlade is pretty trump-tastic compared with Delver. Of course, four of those trumps are Jace, who saw a banning relatively soon after.

PT Hollywood had a lot of Faeries decks, but they didn’t really make it through to the top eight (except for Paulo, who did pretty well but get rolled by one of the nastiest “empty my hand” openings I’ve seen from an aggro deck in the quarterfinals). It also saw the debut of early Vivid Control in the form of Manuel Bucher’s Quick’n Toast, which had a solid day one performance before falling off into day two.

Notably, Elves hits its power cards very quickly. You can see how it could overwhelm Faeries, and how it sure would overwhelm Quick’n Toast.

In Development time has rolled around again – as it does on a largely weekly basis – and this time around I’ve been giving some thought to mulligans. Specifically, I found myself wondering if we can attach some actual numbers to a decision about whether we should ditch an “okay” hand in hopes of drawing an excellent one.
As it happens, the results were a little different from what I expected.
You can click here to read the article and see for yourself, then continue the discussion in the comments, via email, or on twitter.

After ChannelFireball’s unplanned week of downtime, it’s In Development time again.
Pleasingly enough, the article I wrote for last week was not some super-timely metagame breaker, but rather is a somewhat more timeless discussion of how we make those subtle choices between individual cards in our deck…and the somewhat surprising way in which “best for us” may not be the same as “best.”
So click here to read this still highly relevant bit of Magic theory, and then hit me up in the comments, by email, or on twitter to let me know what you think.

It’s in Development time again, and this time around I’m asking a very simple question.
Is this a good card?

No? No.
But why not?
The situational nature of the value of this kind of effect is something players learn eventually as they progress in their skill at Magic, and this week I’ve put together what I hope is a concise explanation about why these cards often don’t do as much as you wish they did, and how this applies to a card from the upcoming New Phyrexia.
Click here to read the article, and then comment, post to twitter, or email me to let me know what you think.

In Development time has rolled around again, and this time it comes with some bonus material right here on Gifts Ungiven.
I know it can sometimes seem like I run out this bizarre analyses for the sake of playing with numbers, but it’s really all about figuring out why decks do (or don’t!) work out for me. Why is my mana choking up the way it is? Why are RUG Jace decks clearly powerful and yet so underrepresented in the field?
This week I’m making the case that it’s all about color depth.
For more on color depth, and how it differs from color coverage, click here to read the article.
…and then click here to download the tools I used to explore these concepts of depth and coverage. 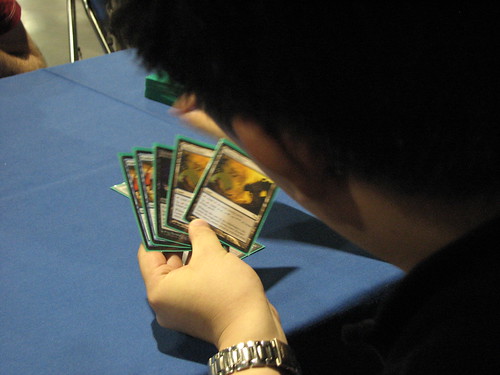 One of the real joys of the ongoing Magic Effectiveness Project is the opportunity to collect ideas from and write about areas of the game that I’m not necessarily personally strong at. This week, for example, I’m writing about reading your opponent. As I make clear in the introduction, this isn’t something I do with great precision myself — I tend to treat my opponent as a generic opponent — but it is something that certain players do especially well.
…and, as it turns out, “it” is not one specific skill, but rather an amalgam of skills split across two very distinct skill sets.
So, if that interests you, and you’d like to see the topic covered with the help of instructive video excerpts from Pro Tour coverage, then I encourage you to check out this week’s In Development and then let me know what you think.

So, what’s the corollary to attacking?
Blocking maybe?
Well, when by “attacking” I mean “offensive strength,” a concept I wrote about two weeks ago, then the corollary is resilience.
In this week’s In Development, I write about the concept of resilience in a deck design. What makes a deck “resilient?” Is there an easy test?
Click here to read the article, and then join the discussion in the comments.