In this earlier post, I highlighted the “lose to my own Glimpse of Nature” play that caught out both Grgur Petric and Zac Hill in their matches against Pascal Vieren. The way it’s told in the coverage, it sounds like most of the story is just a funny bit about losing to part of your own combo. Over on the SCG forums, Zac Hill makes the point that it’s actually about Pascal making an amazing mental play:
No, I was drawing a card every time I played a man. But he’d playtested the exact same decklist and knew what the plan was, and so when I got the correct four guys on the table and activated Entity at 1, Pascal said “Yeah yeah I know the combo. How many times are you going to do it?” I said “100”. He said “you’re dead.” The reason both Grgur and I got “gotten” was the like resigned tone of voice Pascal managed as if he was already in the process of scooping his cards. I told Bill about the massive punt for the WoTC coverage because it was, you know, newsworthy that the G and I had played so terribly, but it really needs to be looked at as a masterful Jedi Mind Trick by Pascal.
I’d already had the impression that this was a “forced” error based on Pascal’s question, but the elaboration on exactly how he forced it makes the story even better.
I’d like to say I wouldn’t let that happen to me, but then, I let someone Prowl out a Notorious Throng off of a Mistbind Clique hit last week, so I’m in no position to talk.

If you followed the coverage from Pro Tour Berlin 2008, you know that the most-played deck was Zoo, and the most successful deck was Elves, with six of the top eight slots. Looking past the top eight, we see rather more variety rounding out the top sixteen. We have:

Notice the lack of Elves? Also, notice that three MBC decks and two Dredge decks top sixteened here? Even in its ostensibly “gutted” form, Dredge was able to power its way through a sea of Zoo and Elves to get two people into the top sixteen. I think that’s quite interesting, and worth further analysis.
But I’m not going to do that here. Instead, I’ve dredged deeper into the day two deck lists, to take a look at interesting builds that were off the beaten path and still managed to make day two. Click through to the extended entry for a collection of interesting deck lists with a bit of commentary on each. I’ve posted them in order from least to most successful, to give you an idea how well the deck and its pilot managed to do.

END_OF_DOCUMENT_TOKEN_TO_BE_REPLACED

Randy mentioned in the webcast coverage that once day two was done, decklists would start appearing in each of the feature matches. So you can now go to the Pro Tour Berlin 2008 coverage and click through to any feature match to see the decklists. I hope they’ll do an aggregate decklist collection as well — all decks would be ideal, but even a day two list would be fun.
Apparently, lots of people were looking for Pat Chapin’s Next Level Gifts list, which you can find here. I was happy to see Shouta Yasooka’s black-blue tron list here.
Of course, if Elf Ball is still viable when the qualifier season for Pro Tour Honolulu 2009 rolls around, expect people to pack a whole lotta hate against it, and deck lists to look quite different.

Previously, I’ve just watched the Pro Tour webcast on my computer, but this time around I had access to our nifty setup that has a laptop slaved to a projector and linked through a tuner to feed the audio into some nice speakers. It looks like this, and it’s a great way to watch: 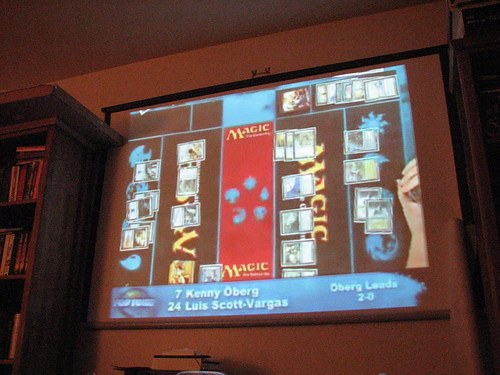 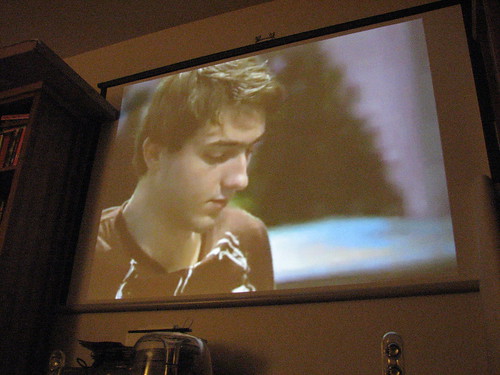 Well then. I went to sleep, woke up again, and the final match is still going. More in the extended.

END_OF_DOCUMENT_TOKEN_TO_BE_REPLACED

The live coverage has begun. Comments and ongoing notes in the extended.

END_OF_DOCUMENT_TOKEN_TO_BE_REPLACED

I’m currently being silly and waiting up to watch the top eight for Pro Tour Berlin 2008. This time around, I’m feeding things through m’s tuner, projector, and giant wall screen, which is great — I’m testing it on the final Tournament Center right now.
As for the top eight, props to local Cali guy LSV for making it in at eighth place, and props to Kenny Oberg for piloting his beautifully weird rogue deck into the top eight as well. I’m not necessarily excited about six elf decks in the top eight, but maybe the mirrors will be interesting. At any rate, this ought not to run too long.

Day one of PT Berlin 2008 is done, and I suppose if I’d been paying attention to preparations for the event, I’d have been less surprised at the day one deck archetype breakdown.
The big story is not that over a quarter of the field turned up with some variant of Zoo, capitalizing on Wild Nacatl and the general value of aggression in a recently compressed card pool (which, even while compressed, still comes in at thousands and thousands of cards). The big story is, instead, the “worst kept secret” deck, Elf Ball. Perhaps most exciting to my sense of quirk, however, is the Tezzeret and Trinket Mage deck that Kenny Oberg piloted to an undefeated day one finish (the other undefeated day one player is PT veteran Gadiel Szleifer, who’s running Faeries with Dark Confidant and Jitte).
My two favorite parts of the day’s coverage are “not knowing how to play your combo” and “All-in Red.”
The first shows up here in the Day One blog, and concerns what happens when you accidentally kill yourself because you’ve forgotten a critical aspect of your combo deck. To wit, Zac Hill “going off” with his Elf Ball deck:
When Zac began going through the motions, Pascal simply nodded, having designed the combo himself and providing the Belgians with it. Seemingly resigned to his fate, Vieren shrugged and asked, “So, how many times?” When Hill responded with a ridiculously large number, Pascal scooped up his cards, adding, “Okay, you’re dead.”
Come again?
It turns out Hill had forgotten he had resolved a Glimpse of Nature in order to get to the point in the game in which he had amassed enough creatures to combo his opponent. Awkward. Zac and Pascal left the round with a crazy story, but things were about to get crazier. Enter Grgur Petric, a respected up-and-coming pro from Croatia. He had gotten his copy of the Elves! deck from Zac, and found himself squaring off against Pascal in Round 5, just a match removed from Zac’s ignominious fate. So how did the match turn out?
Would you believe Grgur also forgot about his Glimpse? Unbelievably, Pascal was the lucky recipient of back-to-back game wins as a result of his opponents’ rare but careless play. When asked about the situation Pascal replied, “I knew about the play. In testing, Marijn [Lybaert] would always say ‘Go infinite,’ and I always said, ‘Don’t or you’ll deck yourself!'”
Notably, Pascal designed the specific Elf Ball build both his opponents accidentally suicided with.
The second is in this round seven coverage of a match between Owen Turtenwald and PT scorekeeper Rashad Miller. Rashad brought “All-in Red” to the tournament, a deck that tries to do, well, this:
Rashad was on the play, and led with Simian Spirit Guide, Rite of Flame, Seething Song, Deus of Calamity.
“That’s… er… fine…”
Turtenwald played a Polluted Delta and passed.
Rashad had a second Rite of Flame and Magus of the Moon.
“We can move on to Game 2 if you like?”
Heh.
Here’s the Day One archetype breakdown
Here are the round eight standings
Here’s the PT coverage
…and, to end it all, here’s the day one wrap: