Jeff Rients has an awesome Gameblog where he talks about roleplaying games and associated ideas. I’ve mentioned him once before, in the context of his essay titled “How to Awesome-Up Your Players”.
Now, there’s yet another (of many) reasons to go visit his blog. He’s training ninjas.
As it happens, Jeff’s nephew has discovered his God-given ninja nature. Cute as this is, the feeling of invulnerability it engenders had the unfortunate side effect of making him completely oblivious to “stranger danger.” What’s a mother to do?
Call in uncle Jeff:
My first line of attack on this problem was to appeal to his ninja virtues. “A wise ninja must avoid unnecessary danger,” I tell him. But he doesn’t really seem to buy it. So I go for the carrot approach. Ever since he discovered my plastic minis collection he’s been dying to try Dungeons & Dragons. I’ve held off. One of my concerns is that I needed to be sure he and his cousin (my daughter) were sufficiently literate and numerate to play. Elizabeth can count to 20 now so the last big educational barrier has recently been removed.
“Alright, here’s the deal then. If you can go four weeks in a row without talking to strangers, your mom and I will schedule a game of Dungeons & Dragons. But it won’t just be ordinary Dungeons & Dragons. It will be Dungeons & Ninjas. But listen up, dude. You know I check in with you and your mom every week, right? You have to get good reports four weeks in a row.”
With that mission in mind, design has already started on that most awesome of games, Dungeons and Ninjas:
I don’t have anything resembling a working draft yet, but I see the Top Secret Dungeons & Ninjas Player’s Manual (the Top Secret part is really in the title) as breaking down into 3 major parts. Part 1, “Congratulation! A Ninja is YOU!” is a reworking of Basic D&D character generation. The biggest change will be in the classes. There will be four: Ninja Warrior, Ninja Wizard, Shadow Ninja, and Mystic Ninja. These classes will correspond closely to the traditional Fighter, Magic-User, Thief, and Cleric, except that they all wear pajamas and masks.
Jeff’s rapidly earning his way into Uncle Valhalla with his heroic deeds.

On Saturday, SSO, decaffeinated and I attended the Future Sight prerelease event. Coming about two weeks before the official release date for this expansion, the prerelease gave us a chance to try out some of the new cards in a sealed format.
Going in, I was thinking I’d play in both “flights” on Saturday — basically, a morning tournament and an afternoon/evening tournament.
We arrived in time for the 10am startup, having preregistered to avoid the lines (I really recommend doing this for any prerelease) and then sat around for a while as everything started up. With the addition of an hour to build decks, the first match of the first tournament wouldn’t actually start until noon.
The announcements just ahead of opening the new cards were entertaining. Normally, new mechanics in a set are explained by the announcer before people see the cards. This set features some 40-odd new mechanics, though, so the announcer just gave up on it and gave us the go ahead. Opening my packs, I gravitated toward a Blue/Black/Red build. Here are my cards spread out about halfway through the deckbuilding process: 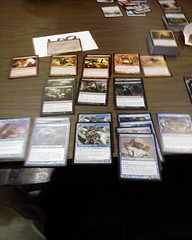 Once gameplay started, things went reasonably smoothly, given the tournament’s size (perhaps seven hundred people). I liked all but one of my opponents, and the odd one out wasn’t a bad guy, just kind of annoying. Whereas SSO tried to play as many Future Sight cards as possible, I think I ended up leaning pretty heavily on my Time Spiral tournament pack. Still, the standout in my deck came from Future Sight, and helped me to my clearest wins of the day.

Shah and Shapeshifter, BFFs
I’ve added some more (blurry) pictures in the extended. The first tournament ended at something like 4 or 4:30 pm, so we collectively gave up on the idea of hitting the second tournament. The organizers said it would probably end at midnight, which is a bit much no matter what — and I was getting up early the next day.
This event drew people in from all over the Bay Area. When I asked my last opponent where he’d come from, he said, “Oh, not far. Novato.”
Novato to Santa Clara seems plenty far to me. It was really nice seeing the size of the greater Bay Area player pool — I wish I could meet more of these people on a regular basis, as I met a lot of cool folks at the event.
Overall, it was pretty fun, and for the next two weeks, I have the cachet of having my cache of cards when thousands of others have none.