Yet … this odd mish-mash of flavor did remind me of someone. Who, who, who … and then it hit me: this same guy rage-quitted on me last night in MTGO!
The esteemed Inkwell Looter has graced us with a great comic covering the genius that is the flavor of Arrogant Bloodlord.
Click here to see the comic.

The first half of BDM’s The Week that Was looks at the return of former pro player and Kibler co-worker Ben Seck (now at Zynga, by the way) to the game.
When the Pro Tour came back to San Diego earlier this season Ben decided to play in some Public Events and had his eye on the Sunday Draft Challenge or perhaps one of the Magic Online events but found himself playing in a 200+ person Extended PTQ with a version of Gerry Thompson’s Thopter Depths deck that was so dominating throughout that qualifier season.
…and…
“Being in the zone” would be a good way to describe Ben’s run through that stacked PTQ in San Diego, as he did not lose a single match en route to qualifying.
I was one of Ben’s match wins on the way to his PTQ victory, as he beat me in round four of the PTQ. I wrote about that PTQ and the round four match here. I punted game three in our match, but Ben is a very good player, so I don’t know if I would have won otherwise. Notably, I also recently mentioned Ben in this column as an example of treating a play error as a learning experience rather than a ‘bad’ experience.
Most fun, however, is this sequence of pictures that starts in the finals of the PTQ, in game three: 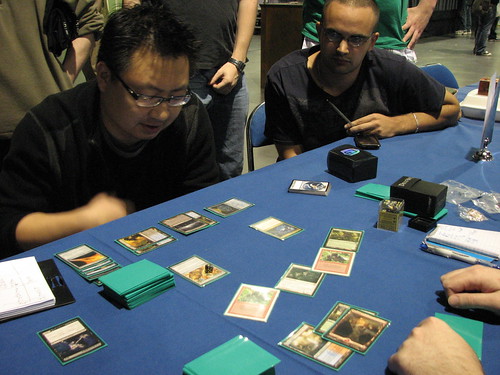 Ben considers a wave of attackers from his Zoo opponent. 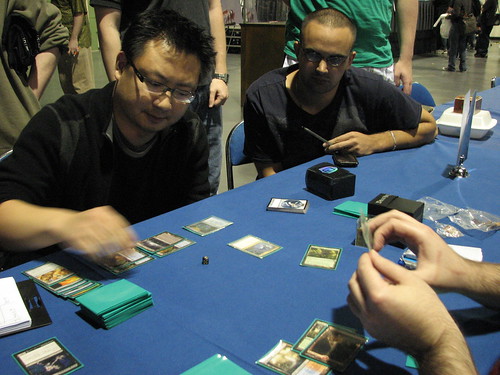 Engineered Explosives clears the board, but only after Ben takes a giant pile of damage. 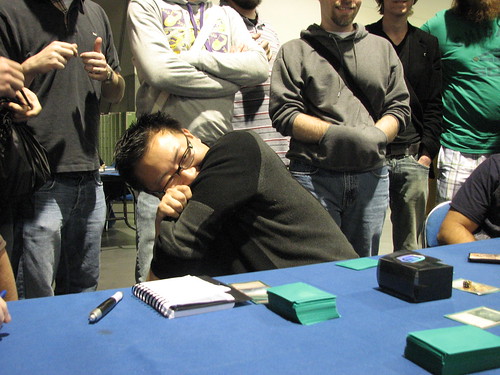 With no other recourse, Ben goes all-in on the Marit Lage token and then has to wait and see if his opponent is going to burn him out. EOT Bolt you, untap Bolt you… 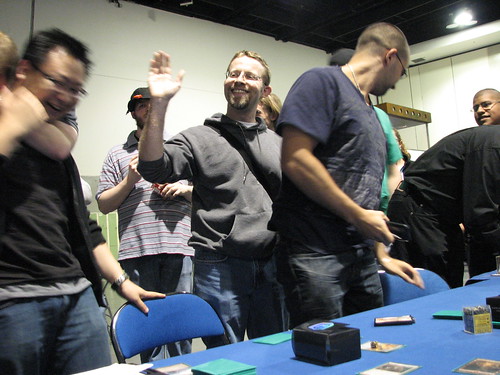 And no third Bolt! Ben gets to untap with Marit Lage and swing for the PTQ win!
For the record, Ben’s opponent had three Lightning Bolts in hand, but only one red source on the board. If he’d topdecked a red source of any kind, Ben would have lost. That said, he still played optimally for that very rough game.

…or women, perhaps.
Over at Mulldrifting, Lauren Lee has written a nice bit that answers the question “How can we get more women interested in playing Magic, and interested in playing competitive Magic?”
Click here to read Lauren’s excellent piece.
I don’t have much to add myself, except that I do think there’s a missing third aspect which is well out of our control – socialization. Lauren plays a lot of video games that few to none of the women I know ever play, and I think a lot of the reason behind that is gender-role socialization that sets in sometime around junior high. At least, I’ve seen junior high as the transition point when girls ditch their Pokemon cards and switch their focus to stereotypical “girl” endeavors. I’m not sure if marketing can overcome this, but I do think that’s the challenge point.
Again, click here to read the article.

In the pleasingly named Nationals Q and Effin’ A series of podcasts, Mike Flores does a cute run-through of the best cards at each converted mana cost in Standard. I think it comes out as something like –
1 – Lightning Bolt
2 – Spreading Seas
3 – Blightning
4 – Bloodbraid Elf
…and so forth.
His point was that the Grixis deck he ran for National Quals runs almost all of the best cards at each mana cost, per his recent principle of “just play all the best cards, regardless of synergy.”
In the past week, I’ve been trying out a more traditional (for me) Jund build featuring this Jund stalwart:

I’ve realized I don’t like Blightning all that much. As a consequence, I don’t use it all that effectively.
I’m not doing the autopilot move of just running a Blightning out and then kicking myself when my opponent plays a planeswalker that I could have killed with said Blightning one turn later. That said, I’m finding it super-disappointing in a lot of my match ups.
Against U/W, it can put a dent in their planeswalkers, but kills none of them outright, if the opponent plays correctly. It similarly doesn’t do much to knock two cards out of their hand if they can just tap out into a gigantic Mind Spring the following turn. If it’s bad at killing their planeswalkers and doesn’t legitimately disrupt their hand, then the sole remaining impact would be on the board…which is utterly absent.
I’m aware that a two-for-one that does damage is theoretically good. In practice, I really don’t like it. It doesn’t impact the game that I believe I’m playing when I run a Jund deck. There’s the occasional “bee sting” ability to kill an opponent that you’ve taken down to 3 life…but then I’d rather just run Lightning Bolt, which can at least act as removal.
Over the past week, I kept finding myself wanting to side the suckers out, yet being convinced that I’m not “supposed” to. I think it made me actively worse at playing and at deck design and development. Blightning just doesn’t do enough proactively for me, nor have I been so pained by it on defense that I’m convinced it’s an awesome card.
So what is the best three-mana card in contemporary Standard?
Here are some cards I like more than Blightning:

Ruinblaster is sort of an honorary mention, as I really want to be casting it kicked. When I build decks, I prefer to treat Ruinblaster as a four-mana card.

Yup, I’d rather have a 2/2 that searches up a land. See, it makes me resilient against opposing Blightnings, it helps me fight my way around Spreading Seas, and it gives me a guy to trade with opposing Bloodbraids. Aragorn is just so much better than a Blightning.

A versatile and often giant creature for a mere three mana. Sure, she draws a lot of fire, but at the three-mana position, I’d rather have a card that has the potential for solitary game wins over a card that can’t even touch the board.

Ending my list is one of my favorite cards since it came out, Maelstrom Pulse. Both better and worse than its progenitor, Vindicate, the universal nature of Pulse’s ability to impact the board makes it the ultimate super-Swiss Army knife – a Jack of almost all trades and master of many.
I’d basically rather play any of these cards than try to cast more Blightnings. It’s no surprise, then, that I’ve had such a rough time of it trying to get Blightning to work for me in Standard.
What do you think? Is Blightning just that good, or has its power waned?

It’s In Development time again, and this time around I’m looking at just how darn fast Standard is right now. Why tap out to cast some dudes when you could tap out to cast some dudes with haste? Right.
If you’re getting the feeling that it’s all life in the fast lane right now, I’m inclined to agree. I go into that and run out my new Jund list (lists, really – check the comments) right here.
So, click here to read the article and then find me on twitter and let me know what you think.

After a bit of a glitch, the full version of my guest hosting take on This Week in Magic is up at ManaNation. I’m filling in for Trick, who had to cut out early to go attend GP DC and thus couldn’t do his normal extensive reading.
Boy, does he read a lot of sites. More than I tend to, at any rate.
I hope it’s a nice sampling of the top items from the community over the past week.
Click here to read it.

If Quiet Speculation isn’t part of your normal Magic content rotation – well, why isn’t it?
Head on over there right now to read a guest post I wrote that talks about why I keep track of card prices.
It’s not because I like to wheel and deal a whole lot. But it has a lot to do with making sure I get the most for my Magic money over the long run.
Click here to read the guest piece and then hit me up on twitter and let me know what you think.

This week’s In Development is a meditation on how to make getting better at the game fun rather than painful, and why doing so may well make you a better player.
Click here to read the article, and then find me on twitter and let me know what you think.

You’ve heard me talk about National Qualifiers, and you may have seen Chris McNutt’s first article over on the StarkingtonPost about the system. I complained on Facebook about his lack of research vis-a-vis distances (and thus driving times) for Cali players at the time of his first article.
This time around, Chris has come back with a really nice breakdown of the travel implications of the new system across the U.S. He also points out that he’s not a ChannelFireball basher, for the folks in the audience who feel the need to defend us no matter what. We love you all, but it’s fine, no need to aggro out on people. 🙂
Chris’s net conclusion is pretty much exactly what I would have expected – overall, the change has increased access to National Qualifier tournaments across the U.S. I’d never imagined it would be otherwise, since breaking a smaller number of bigger Regionals into fifty National Qualifiers of various sizes would pretty much have to put most people in most of the U.S. physically closer to a tournament.
That said, his numbers point to what I was talking about this week – it sucks for California. Here’s his quote on the topic:
“Who are the most screwed in the 2010 season? I