This week’s In Development continues a legacy of…er…Legacy Dredge. Do we even need to say Legacy Dredge at this point? Well, I suppose I could write about Vintage instead…
Anyway, after last week’s article presenting my deck from the San Jose Legacy Open, I had a lot of requests for articles on actually playing the deck. So this week is part one of a two-part miniseries covering how I play Dredge.
Part one, which you can click here to read, is mostly about the philosophy behind the game one / game two divide in Dredge, and then how I play game one. Next week will cover sideboarded games and some specific sideboarding ideas.
This may be my way of cleverly dodging doing any preview articles for Mirrodin Besieged. On the other hand, I may just like Dredge.
Either way, you can click here to read the article.

Every so often, comment threads prompt me to start asking, “Why would anyone..?” before I complete my own thought with, “Because anyone can comment.”
As C.S. Lewis, among others, reminds us, there is a natural human impulse to tear down. I’ve heard this expressed in the particularly American context as rooting for everyone to do well, then hating them when they do. So it’s not exactly surprising that you could bet money, blind, on seeing ill-considered, angry-sounding comments on almost any online content.
So it goes.
That said, I do find particularly curious the brand of hate that gets fired at fellow ChannelFireball writer and local nice guy Matt Nass.

In his latest article, Matt wrote about the Elves deck he played to a top four finish in the most recent SCG Open Series event. It’s a pretty cool article in which Matt links to a conversation that led to the build of the deck he ended up running. If you appreciate insight into how things work (and if you read anything I write, you do), then you’ll enjoy going through that, as well as his general explanation of the deck and how it played.
So, good article after a very good finish in a big event.
Naturally, the comments start with several people bitching about how all Matt ever writes about is Elves, how Matt sucks, and the ‘clever’ remark that we should have an author for each other tribe.
But you see, Matt won. Like, a lot.
And then he played a different Elves deck the following day in the Legacy Open and also did damn well, finishing in the top sixteen.
As LSV points out in his comment on the article, Guillaume Wafo-Tapa basically does the same thing Matt has been doing lately, playing some form of U/W control whenever he can…just that for Matt, it’s Elves.
Now, I get it when I draw fire for suggesting a build that hasn’t been tested particularly broadly — or, indeed, when any author draws fire for that. But Matt is talking about deck lists with which he has seen significant success at major events. As he also pointed out, he was not alone in taking the deck out for a spin on the Standard day:

Yes, that’s the American national champion busting people up with Elves.
So…what’s the issue? Is there just enough of a “Timmy” flavor to Elves as a deck to give an extra handhold to all the bitter trolls out there? As I said in the intro, I understand that there’s a basic desire to tear other people down rather than figure out how to make ourselves better. But it seems like it takes a particularly willful lack of mental integrity — in the sense of “structural” and not “moral” — to go after a successful player for their choice of paths to success.
For an outside observer, it just looks like a bunch of people who are allergic to victory.

Given that I’ve recently pushed for players to prepare for events, it’s with some embarrassment that I have to admit that I was not especially prepared for the Standard portion of the SCG Open Series event in San Jose last week. I’d prepped for the Legacy portion in late December, then things came up, as they tend to do, and I found myself without time to do the requisite testing for Standard.
But hey, you’re not going to not go, right?
As you can see in my round one feature match, there were issues. Even so, some of you wanted to see the deck list, so I’m including it in the extended entry below…along with some notes about how I might take what turns out to be a reasonable enough structural base for a deck and improve it.
I’ll also explain the title of this post.

END_OF_DOCUMENT_TOKEN_TO_BE_REPLACED

You’ve seen the deck tech, now read the article!
In this week’s In Development I talk about the Dredge deck I played at last week’s SCG Open Series Legacy tournament in San Jose. The single biggest change is a pretty big one — I’ve completely stepped away from the default mana base for Dredge to one that won’t keep betraying me like Sean Bean.
All that and more is covered in the article.
Enjoy! 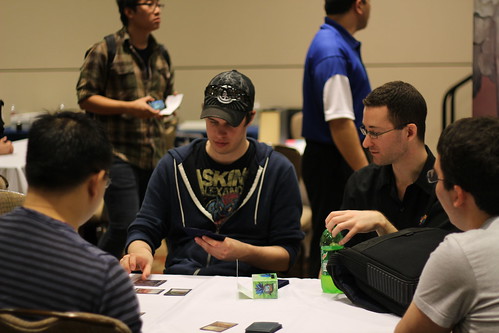 I’ve put my pictures from the Open Series event in San Jose up on Flickr. You can click here to see the full set of 156 pictures, covering both the Standard and Legacy days.

Thanks to Inkwell Looter for taking over my camera to get some pics of me in the feature match area.
I had fun at the SCG Open Weekend in San Jose this past Saturday and Sunday. It was great meeting old friends and readers, and I had a lot of fun swinging out of my graveyard on both days – Saturday it was Vengevines, Sunday it was Ichorids and associated zombies.
I also appeared on the SCGLive coverage with Joey Pasco and Gavin Verhey (on Sunday), and showed up in the coverage on both days. If you missed it, here are the links:
Me versus Nathan Ward in Round 1 of the Standard Open. It did not end well. 🙂
The Deck Tech on my Dredge deck from the Legacy day. I may have more to say about this deck. This week, even. Watch for it!
Pic of me playing on the Standard day
Pic of me playing on the Legacy day. The caption lies – I’m certainly not Dredging up a storm with that Leyline of the Void opposing me. I did win that game, though, keeping a five-card, no-land hand featuring a critical Unmask. I may write about that, too.
I had a lot of fun, and think it would be great if I could make it to some other Open Series events this year.

So, it’s In Development time yet again.
Are you going to any Legacy events anytime soon?
Say, any big ones?
If you’re considering it and you don’t have a lot of experience in the format, this week’s In Development might be the guide for you. I’ve tried to cover the format form the perspective of the non-devoted Legacy player – say, someone who is intimidated by a format with so many viable decks and over eleven thousand cards.
If that sounds like it might be up your alley, then go check out the article and then find me on twitter and let me know what you think.

This is a busy week – I’m moving, and I’m planning for a whole passel of event seasons. Well, at least two.
This week’s In Development is about consciously approaching a new event season. Are you trying to take down a PTQ for Nagoya? Hitting up the SCG Opens? Involved in the next CFB seasonal series? This article is all about identifying your goals, then figuring out how you need to build your plans to achieve those goals.
So, if that’s up your alley, click here to read the article and then find me on twitter to let me know what you think.

So, Mirrodin Besieged is fast approaching and Wizards just recently announced the Prerelease Promo card – Hero of Bladehold.
Stats-wise, this is a perfectly reasonable card. It survives Lightning Bolt and is sort of a mini-Titan, bringing on the bonus soldiers each time it swings.
Here’s the actual preview art:

Which brings us back to my title for today’s post.
Are you kidding me?
I’m used to feeling that the promo art is generally worse than the original art for a given card.
But there’s a wide gulf between “I don’t like the promo art for Anathemancer” and “please don’t let your freelancers use porn for their photoreferencing.”
One of the things I’ve genuinely appreciated about Wizards over the years is their approach to issues like how women are represented in their games. I’ll return once more to a now five-year-old article that I’ve talked about before in which Matt Cavotta cites this line from the Magic: the Gathering Style Guide:
Feel free to paint beautiful women, as long as they’re shown kicking ass. No damsels in distress. No ridiculously exaggerated breasts. No nudity.
So how are we doing on that four-part test?
Is the Hero kicking ass? Hard to say, but I think we can at least credit her with the intent to kick ass, considering her expression. And she has a spear or something, so there’s that.
Is she in distress? Nah.
Ridiculous breasts? Now we’re sliding off the four-point scale here. Exactly how is it helpful for her to go into battle in that steel push-up monstrosity?
Nudity? The Hero is not formally nude, but she’s more “end-stage-stripper” in attire than anything else.
And although Matt did not specifically address this in the section he quoted from the Style Guide, the combination of emaciation with those gigantic breasts really cements the impression that either that Auriok heroes moonlight as porn stars or that Scott Chou, whose art I otherwise tend to like, thought that this was a good fit for the concept of “hero who fights world-devouring menace.” Although, in fairness to Scott, Jeremy Jarvis had to have approved his initial sketch, which presumably was just as porny-rather-than-heroey.
Incidentally, Scott Chou can illustrate kickass hotties who aren’t horrifying:

The Spiritdancer is actually a pretty solid counterpoint to the Hero. She’s also basically in a bikini, yet instead of feeling like we interrupted her pole dancing routine, we imagine that she’s about to have all her magical beasties kick our asses.
But then, Mirrodin has always been, inexplicably, the land of random boobs:

I mean, what doesn’t that picture convey about the feeling of having one of your spells played against you?
Or something.
Anyway, the Hero is not just bad, but kind of insultingly bad. It’s also a rare major misstep in terms of art from Wizards, which is why I thought I’d bring it up.
Less of this, please. Seriously, always less of this.