Yesterday, I gave a sneak preview of my States deck. Today, I went…and dropped after round four, having hit an unfavorable matchup twice running (can you guess which one?).
This was an eventful States, featuring hundreds of players, a hunt for tables, and a visit from the San Jose fire department. I have a sneaking suspicion it’s still going on even as I post this.
Over on Top 8 Magic, BDM posted about New York States. They had 134 people.
We had 273.
More in the extended.

I arrived at Superstars uncharacteristically close to the 10am “start” time — fortunately, there’s an entire building full of free parking across the street. I wandered in only to see something like this: 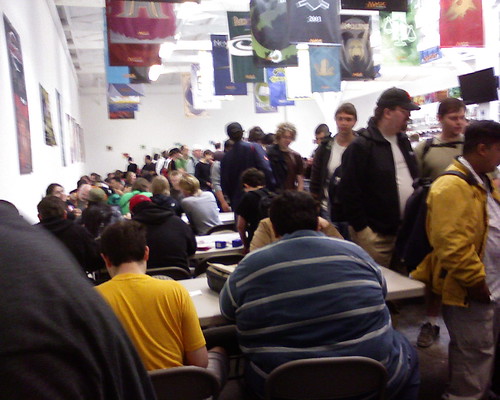 That’s the sign-up line, vanishing off toward the far end of the venue, where it wraps back around to the front of the store again. Notice how the tables are all full already?
I filled out my deck list while I waited for the end of the line to come to me. As a general rule, it’s a great idea to have a deck list printed out ahead of time to bring with you. I just write my deck list down in the notebook where I track life totals and take my game notes; that way I always de-sideboard correctly after each match.
Shortly after I stepped into the line, it stopped dead. Eventually, it was announced that we were waiting on more tables. After another delay, more tables arrived, the rest of the line was cleared out, and we waited for pairings. When pairings went up for round one, we all sat down and the announcement came out.
273 players. Nine rounds. Boo-yah.
How big was your States?
Here’s the deck I brought:
Anunnaki 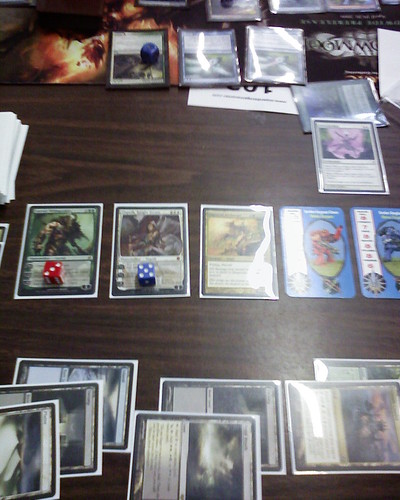 The Space Marines are Elspeth’s soldiers.
Then I played Liliana, and poor Bryce was done.
1-1-1 (4-4-1 games)
Then the Fire Marshal showed up. Here’s his truck: 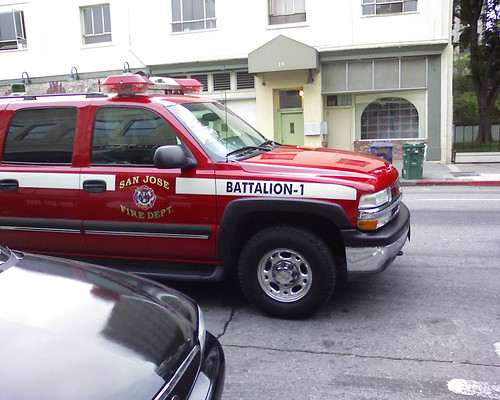 I don’t know the whole backstory here, although I suspect it’ll turn up in a Riki Rules column sometime soon. I imagine, however, that someone nearby noticed the roughly three hundred people spilling out onto the sidewalk in front of the venue between rounds (the judge staff had us all go outside, then check our pairings on the way back in at the beginning of each round). After a protracted delay, things restarted without apparent disruption.
I have to say, I was kind of expecting something along these lines. There were a lot of people there.
Round 4 versus Jack, playing Faeries
Jack came from Los Angeles for States this year. In case you’re not down with California geography, that’s about 350 miles.
In game one, I hit Jack twice with Treetop Villages, losing each one to an Agony Warp on the second swing. I followed with Liliana Vess and began grinding Jack’s hand down. He tried to beat back with Mutavaults, losing one to a Condemn. I played out Elspeth and stared the flying soldier beats. He played out a Clique on his turn (I think…I recall him playing it at an odd time and ending up tapped out). With him tapped out, I sent a flying soldier in, then Profaned him out.
In game two, Jack stared EOTing Sprites and Scions, and I burned removal on them, not wanting him to get up to Sprite critical mass (about four faeries in play, pretty much). Unfortunately, this was followed by Clique and then Clique beats. I wasn’t able to recover usefully in time, and that was that.
I think I’d checked out at this point, as I actually pulled all my Epser Charms in siding for game three, then stopped, realized I’d pulled my only way of killing a Bitterblossom, and put them back in. Yeah. Checked out.
Jack played a second-turn Bitterblossom, so I would have felt especially dumb if I realized I’d taken the Charms out then. Naturally, I didn’t draw into one anyway, and Sprites and Scions overran me, even though I did manage to stick a Garruk.
1-2-1 (5-6-1 games)
At this point, I knew I’d checked out, and I had a friend’s event to go to if I wasn’t winning, so I dropped. It was about 4:30 in the afternoon when I left — with five rounds and a top eight left to go. Again, I imagine Riki will cover this at some point, but California States must have finished awfully late (or early on Sunday morning, depending).
Overall, I think my deck choice was great fun, but too complex. It likely would have done well through a day of mostly five-color control and aggro, but Lark, Lark was enough to screw up my day from the start. The mana base is also too iffy, as I had a couple really annoying draws where extremely useful cards were stuck in my hand for the entire game.
On the plus side, my deck did effectively blank out significant portions of my opponents’ decks, which I had hoped would happen.
I may be back at Superstars for their 1K next week, with a new, different, and fun build. I enjoyed this year’s States, even with the bad matchups and some poor keeps on my part. Everyone I played against was nice, and the fire department visit was an interest break in the day.
I look forward to next year.