m, D, and I went to day 1 of Grand Prix San Francisco today. Magic: the Gathering Grand Prix events are open events (anyone can sign up) that give the winners pro points, cash prizes, and invites to upcoming Pro Tour events. GP SF, for example, is handing out invites to the upcoming Pro Tour in Valencia, Spain. Since invites come with plane tickets, that’s not a bad prize.
We came mainly for the experience of a GP, since they travel, and we can’t expect to have one come quite so close anytime in the near future. Although they called it GP San Francisco, this was more properly GP San Jose, as it’s taking place in the San Jose convention center.
Some more commentary and pics in the extended; you can also see more at my GP SF Flickr photo set.

They had attractive, event-specific place markers for match tables. This is the highest numbered one, which shows that their guess on the maximum size of today’s GP pretty much matched mine: 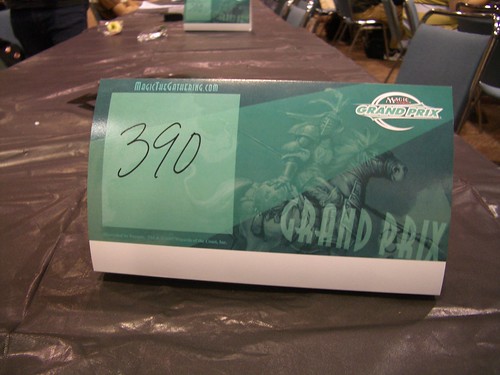 A total of 671 people actually attended. Since many people had early-round byes, and others would drop over time, I suspect there were never the theoretical maximum 335 matches happening at the same time.
Being at real DCI event, we had real DCI judges to adjudicate: 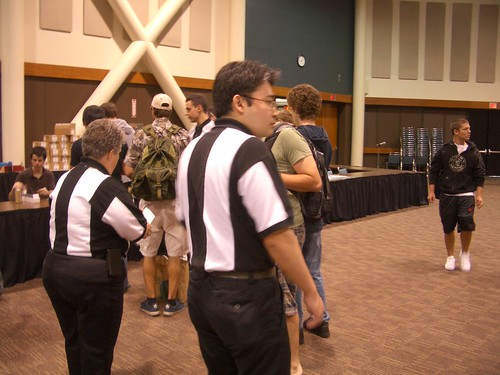 And they picked up deck lists to start the day: 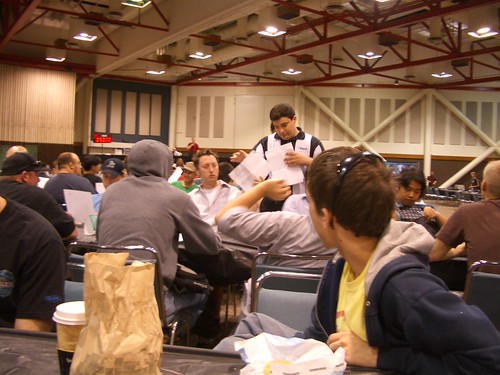 Any time one of the matches goes over the 50-minute time limit, it typically gains a judge to watch the final five turns: 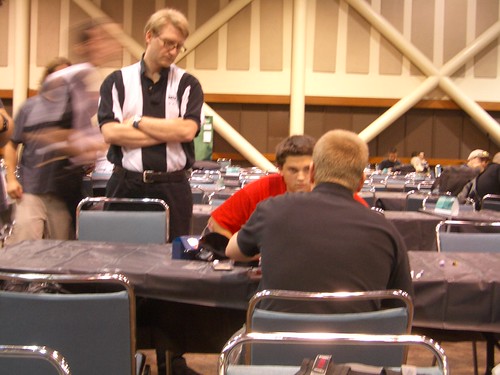 Since GP events give out pro points (useful for maintaining your pro level, and for winning player of the year) many pros showed up today. 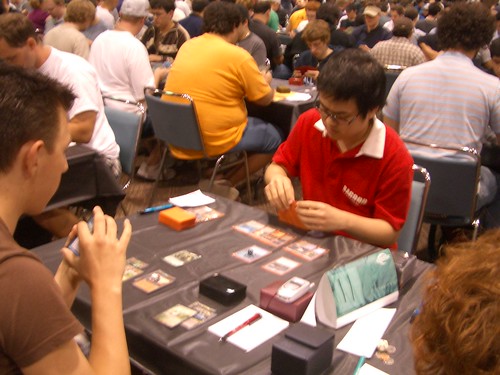 That’s Portuguese player Tiago Chan, whose quarterfinal performance against Gab Nassif in Worlds ’06 is worth watching (or potentially rewatching from time to time). He never looks happy when he plays. 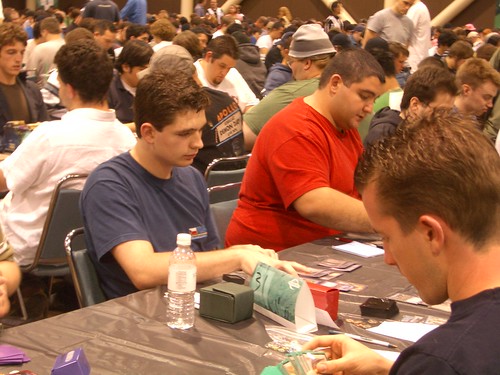 Paulo Vitor Dama da Rosa and Antonino De Rosa. Antonino was doing well when we left, but seems to have dropped off a bit since then. Paulo’s doing quite well. 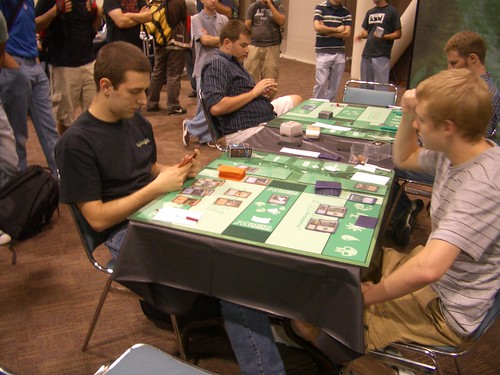 That was the first feature match we watched — Steve Sadin versus John Pelcak. Sadin’s main deck seems to be a Walk the Aeons / Rite of Flourishing deck, but after being run over by Pelcak’s U/G bounce / ‘goyf deck in game one, the Walks and Rites went out, and aggro and anti-aggro tools came in. Sadin took the next two. 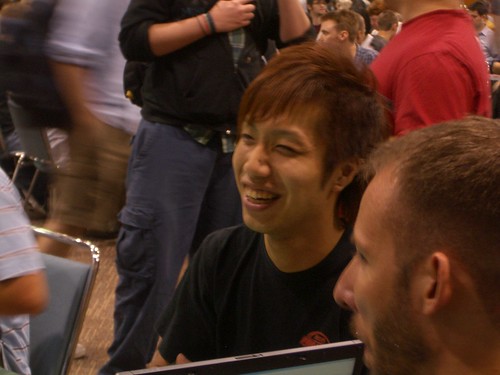 This is Tomoharu Saito. m and I watched a feature match between Tomoharu and Olivier Ruel. 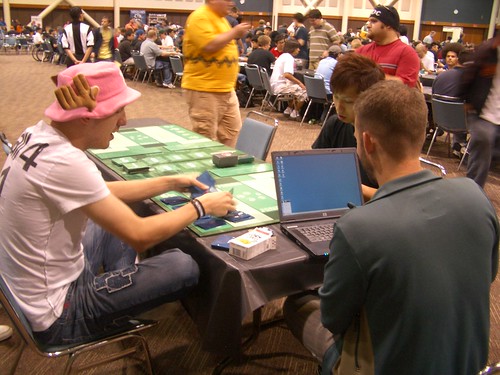 You can read the highly inaccurate match coverage for that match here. The coverage gets off on the wrong foot and pretty much stays there, trying to insert drama where there was none:
Fans were taking photos of Ruel and his pink, antlered hat. Always the showman, he mugged and hammed it up for his adoring public. This man loves the attention.
m and I were the fans in question, but we were pretty much taking pictures of Saito the whole time. I would have expected that to be clear, given that most of our shots were taken from behind Ruel. 🙂 m noticed that the coverage man taking pictures had poor camera equipment. I, in turn, was surprised to see just how rarely he actually snapped a picture. It’s no surprise that coverage photography tends to be limited and not very nice to look at. 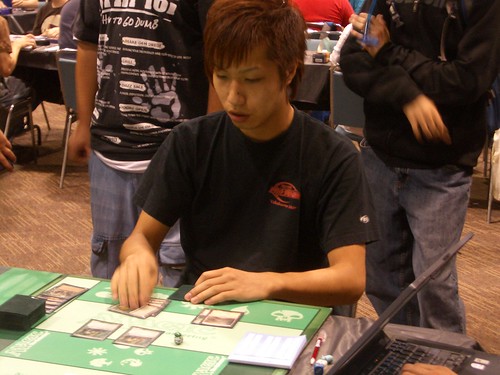 Saito won 2-1. His deck came out very quickly, and he played fast as usual (the coverage incorrectly refers to glacial play from Saito…he played fast).
We finally witnessed in person the characteristic “Saito face slap,” a double-handed slap to the face (one hand per cheek) — and realized that it’s loud! He slaps himself really hard. The concept, apparently, is to keep himself focused through pain.
In addition to face slapping, Saito has the more innocuous habit of using little, plastic pigs as tokens. In his deck today, he used the pigs to represent the 3/3 elephants generated by Call of the Herd. A little extra bit of cute fun happened when an elephant token picked up a +1/+1 counter from Llanowar Reborn. Saito quickly balanced the counter on the back of the token and moved on: 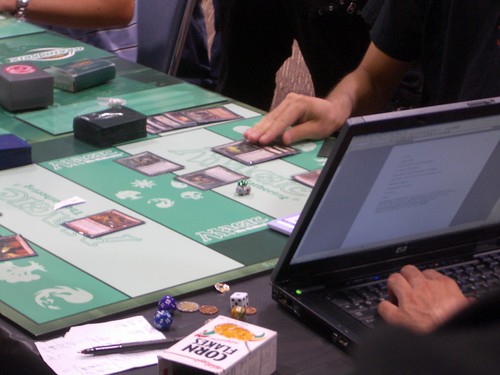 Once d finally hit his third loss (3-3 for him…good job!), we all headed out for the day. I plan on coming back tomorrow to watch the top 8 matches play out.
Overall, it was a fun day. This much competitive anything in one day is pretty taxing, however, and it was good to finally head home for the day and let that part of me relax.