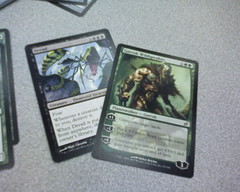 Last weekend, I and 164 other Magic players came to San Jose for our local Pro Tour Qualifier (feeding into Pro Tour Kuala Lumpur 2008). The format was Lorwyn sealed cutting to Lorwyn draft in the top eight. More in the extended.
(I’ll spoil the punchline: I didn’t win.)

This was my third PTQ experience, the first two being the two-headed giant PTQ San Diego, the second being PTQ Valencia. At the first Limited PTQ I attended, we registered card pools, then passed them off to another team to check our registration, then handed them off to the final team. This time, we just registered the cards and turned them in.
Registration – “OMG!”
As our room full of people opened tournament packs and boosters, the overwhelming sound was players loudly proclaiming the card pool they’d opened a sure tournament winner. The standout in terms of sealed pools was the one featuring twin Thoughtseize. As someone near me said, “You just walk away with that one.” That’s close enough — two Thoughtseizes means you’re turning a profit on the tournament entry fee, even if you don’t place at all.
I was happy to not receive the cards I opened. I couldn’t see anything coherent to do with them, despite a Garruk Wildspeaker in there (with perhaps five other green playables).
Deckbuilding
Here’s what I saw in my final pool: 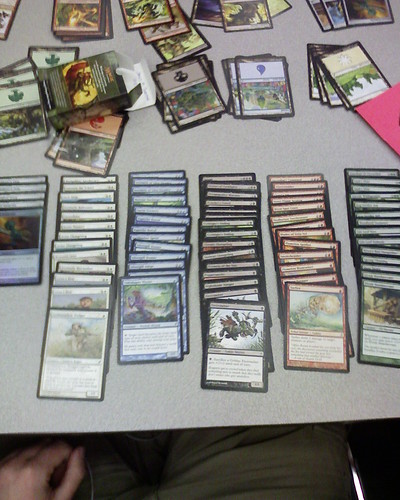 And the rares? Two Mosswort Bridges (ugh), a Dread, a Garruk Wildspeaker, and something random. Notably, my pool was rich in color fixing, with a Springleaf Drum and two Wanderer’s Twigs. At first, I was drawn to the white cards, with a Necksnap, some Kithkin, and two Avian Changelings…but black really stood out as well, with two Eyeblight’s Ending, a Peppersmoke, and a Dread. Finally, Green had my own Garruk calling out to be used. Red and blue weren’t terribly exceptional, without enough internal synergy in either to really draw me into those colors.
After some consideration, and keeping my color fixing in mind, I decided that I’d go basically black/green, splashing white for exactly one card — Neck Snap. Here’s my final deck: 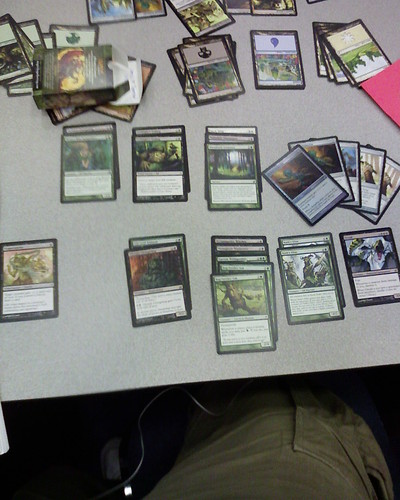 Game play
Overall, I think I can sum up my game play experience as “nearly enough removal, not enough bombs.”
In round one, I came up against a white-red-green giants deck, basically. The first game was a stalemate until he dropped a Vigor, and suddenly my Deathtouch defenders had nothing on his undamageable, ever-growing team. I scooped and tried to rush into game two, where I had land issues only to lose another one to Rootgrapple. Shucks. Match loss.
Round two saw me paired up against a black-red deck full of burn and removal…but which I was able to outrace. I won game one, lost the race in game two, and raced him again in game three, only to pull a late-game Garruk. From then on, it was Beast, Beast, Beast, Woodland Guidance targeting Garruk, Beast, Beast, Beast, win. Equipping Beasts with Runed Stalactite is seriously not bad at all.
Round three put me up against a white-red-green Kithkin deck that I just ran over in game one. In game two, he managed to beat me up with Hoofprints of the Stag (which is basically card advantage when it’s sucking up your removal, and when Hoarder’s Greed powers it up), and then his unstable mana base helped me out in game three. He mulliganed to five, played out a Goldmeadow Stalwart, and then groaned when my Wren’s Run Vanquisher came out the turn after.
In round four, Faeries ran me over. I made my only serious play error in this round, failing to gain life with my Ash, which I hadn’t had in play to that point. This probably cost me at least the second game.
In round five, I blitzed over my opponent’s white-black deck in the first game, ran out of steam in the second, and then ran afoul of a Changeling Hero in the third. When you can’t draw into removal, a lifelinked creature is a terrible, terrible thing.
Round six was the last I played, and this time I hit Merfolk. I tried, but could not hit enough removal to keep him off the Summon the School engine. Uck, and all that.
I dropped after six, expecting to leave to go meet up with a friend afterward. They were delayed, so I hung out and took in the event: 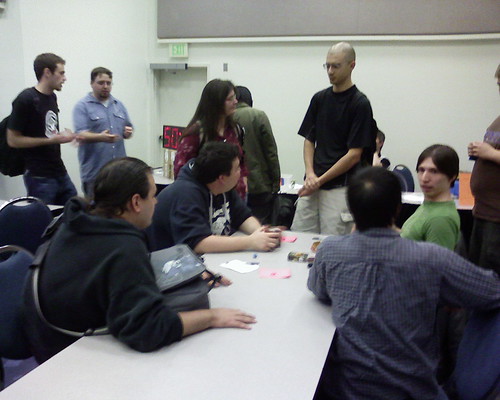 Those are, incidentally, US Nationals and GP San Francisco champ Luis Scott-Vargas and GP SF runner-up Jonathan Stocks, along with various friends from the local and Reno scenes. Click here to go to my videos of their finals match, along with other video coverage of GP SF.
After hanging out and chatting for a while, I played some nice casual Standard games with my W/G Martyr deck…against a W/u Martyr deck. This picture speaks volumes about that matchup: 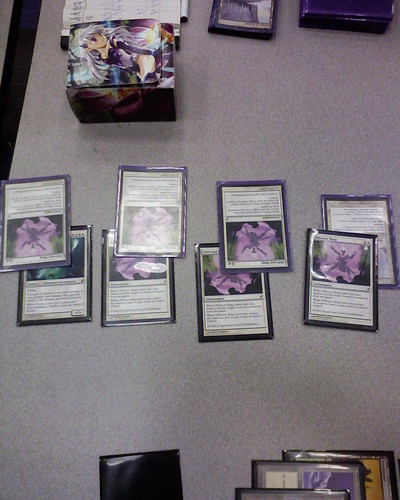 Overall, this was a great time. I played and talked with people from nearby and as far away as Reno. I make a point these days of asking people where they’ve come from, because I always underestimate just how big our “local” tournament scene can be. I’ll definitely be back for the next PTQ.*
*Even though it’s Extended, and my card pool basically stops at Kamigawa.